Our website and mobile app will not be accessible on Fri, 2 Dec, 5.30am to 7.30am due to scheduled maintenance. Our Customer Service Officers will also be unavailable during this time. 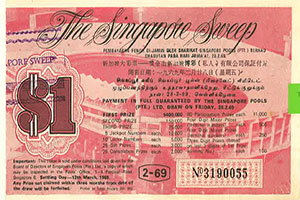 1969: Once known as the Big Sweep, the first Singapore Sweep was held by Singapore Pools in 1969 to raise funds for the construction of our first National Stadium. Each ticket cost $1 and the first prize was $400,000 then. The game contributed $14.5 million to the construction cost over a few years, till 1973.

1982: The first prize amount was further increased to $1 million and the ticket price to $2.

1995: The prize structure was revised to include more prizes, including a Premium Prize worth a minimum of $99,000, and the possibility of snowballing.

1998: The game was relaunched with a new prize structure, raising the Premium Prize to a minimum of $200,000. All net proceeds of the game were pledged to the construction of the Esplanade - Theatres on the Bay.

There is a one-in-eleven chance of winning a prize in a Singapore Sweep draw.

Won a prize? Use this calculator to find out your exact prize amount.